The effects of climate change are now visible to all and are becoming more and more frequent and severe. In this frightening scenario, a microscopic but huge army might help: Microbes!
Laura Baldassarre and Sebastian Fraune
2 contributors
Like Liked by Gao Jianguo and 1 other

This study shows that sea anemones acclimated to high temperatures exhibit increased resistance to thermal stress and that this improved fitness can be transferred by microbiome transplantation. These results indicate that plasticity mediated by the microbiota might be an important factor facilitati…

Predicting how natural ecosystems and organism communities may adapt to future environmental conditions is of primary importance. Scientists are making every effort to assess the adaptive capacity of different organisms and to look for tools and strategies to help them cope with the new conditions.

All multicellular organisms are colonized by an enormous number of microorganisms that have co-evolved with them since the beginning of life history. The totality of bacteria, archaea, viruses, protozoa, and fungi living in association with a host is called the "microbiota," and the microbiota plus its host organism ensemble is called the "metaorganism." It is well established that the microbiota is fundamental to the survival of its hosts. For example, it can support nutrient uptake, defend against pathogens, remove toxic compounds and provide beneficial ones. In terms of rapid global change, the shorter generation times of microbes would allow the metaorganism to adapt much faster than the genetic recombination of the multicellular host alone. As a research team led by Prof. Sebastian Fraune (based at Heinrich Heine University Düsseldorf), we investigated the question of how the microbiota can support an organism in adapting to changing environmental conditions; in particular, we studied the involvement of the microbiota in the temperature acclimation of a marine anemone, the starlet sea anemone Nematostella vectensis. We demonstrated that the composition of the microbiota changes together with the animals’ resistance to heat stress. Based on this correlative evidence, we went one step further and provided causal evidence: we have been able to transfer resistance to heat stress by transplanting the acclimated microbiota to non-acclimated anemones.

In this long-term experiment, we monitored the anemones under changing environmental conditions for more than four years. Our 750 anemones (50 animals X 5 boxes X 3 temperatures) were all clones derived from a single individual and therefore genetically identical. We divided the animals into three experimental groups to analyze their performance under their optimal/current conditions (20°C), possible future warmer conditions (+5°C), and a cooler control (-5°C). During the experiment, the animals showed several physiological differences. The animals kept at the higher temperatures increased both their sexual and asexual reproduction rates compared to the animals kept at 15°C, and as a result, became much smaller than the cold-acclimated animals. Notably, tolerance to heat stress (exposure to 40°C for 6 h) was much higher in the animals acclimated at 25°C than in the other two groups, and these differences increased along with the acclimation duration.

Through a  transplantation experiment, we transferred the microbiota associated with the acclimated anemones to non-acclimated clones. The animals that received the microbiota acclimated at 25 °C showed the highest resistance to heat stress. In this way, we succeeded in demonstrating a clear relationship between microbiota composition and host acclimation. We experimentally confirmed the "hologenome concept", which defines evolution as the adaptation of host organisms together with the microorganisms colonizing them with common advantages within the metaorganism ensemble.

We also investigated whether the acclimated microbiota can be passed on to the next generations, a necessary condition for lasting acclimation. In a previous work, we showed that in Nematostella, certain bacterial strains are specifically passed on from parents to their offspring. Thus, the heat-resistant symbionts could be directly inherited, ensuring the survival of early life stages that are already "pre-adapted" to the new conditions. The current study has shown that acclimated animals pass different and specific microbiota to their offspring and that the offspring of mothers acclimated to 25°C have the highest survival rate.

Our results help to clarify the mechanisms responsible for the rapid temperature adaptation mediated by the microbiota. In further steps, we plan to investigate the role of each bacterial species involved in the acclimation process. To this end, bacterial strains are currently being isolated and detailed genomic analyses are being performed to determine the possible individual relationships between specific bacteria and host metabolites.
Host-bacteria interactions during thermal acclimation also play a fundamental role in many other animal and plant species, up to entire ecosystems such as coral reefs. A better understanding of the underlying processes is therefore essential to better assess and mitigate the impacts of global changes on endangered habitats.

This project was funded by the Human Frontier Science Program (HFSP) within the Collaborative Research Centre (CRC) 1182 "Origin and Functioning of Metaorganisms". 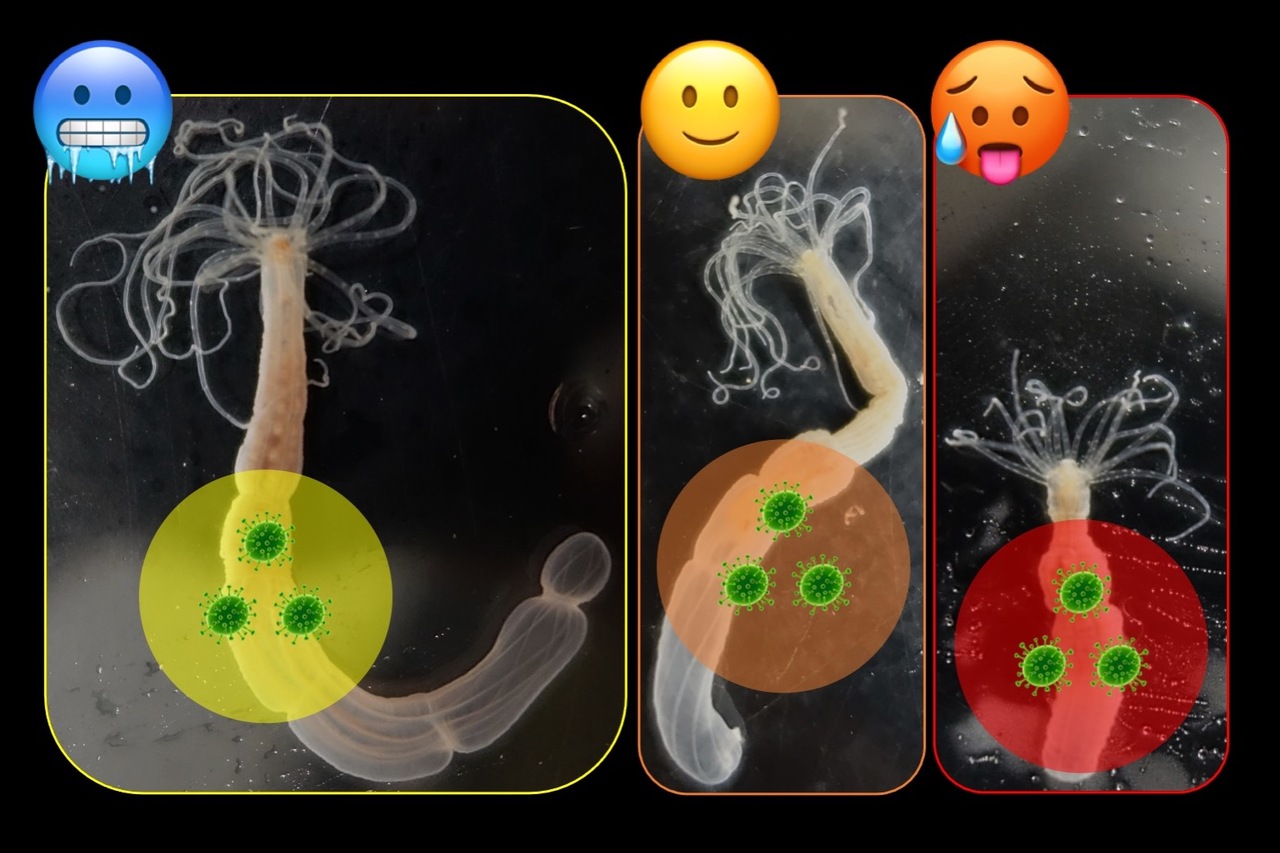 The effects of climate change are now visible to all and are becoming more and more frequent and severe. In this frightening scenario, a microscopic but huge army might help: Microbes!