A bumpy ride to the re-discovery of Zlatý Kůň

Largely forgotten by the scientific community for almost 20 years, Zlatý Kůň, the skull of a woman found in the 1950s in Czechia has provided the oldest modern human genome yet reconstructed, suggesting that some of our ancestors expanded into Europe more than 45,000 years ago but later disappeared.
Cosimo Posth
Junior Professor, Archaeo and Palaeogenetics, Institute for Archaeological Sciences, University of Tübingen
Follow
Like Liked by Carla Gnecchi

A genome sequence from a modern human skull over 45,000 years old from Zlatý kůň in Czechia - Nature Ecology & Evolution

The authors present the genome sequence of a >45,000-year-old female Homo sapiens individual from the site of Zlatý kůň, Czechia. Although radiometric dating of the human remains was inconclusive, the authors were able to use molecular methods to demonstrate that she was probably among the earliest…

It was a grayish morning in Jena (Germany), when I hopped on my bike to go to work. As usual, I was running late. As soon as I reached the first crossroad a car ran through the stop sign and, in order to avoid it, I crashed on the ground… not a good start of the day! After checking that I was still in one piece I continued my bike ride but once I reached the office (Max Planck Institute for the Science of Human History [MPI-SHH]) my hand was already stiff and swollen. There, waiting for me, were two jovial Czech researchers, Jaroslav (Yaro) Brůžek from the Faculty of Science and Petr Velemínský from the National Museum of Prague (Czechia). We were planning to discuss about the ancient skull of a woman known as Zlatý Kůň, named after the hill on top of the cave in Bohemia (Czechia) where the skull was found in the early 1950s. Two decades ago, this human specimen was radiocarbon dated to an age of 15,000 years.

However, Yaro and Petr couldn’t wrap their heads around this date, “we think Zlatý Kůň is much older!” they told me. The skull morphology and the original archeological information made them believe that this individual should be older than 30,000 years.

I listened to their ideas with great interest but also with a dose of skepticism since, based on my previous experience, it is more common that skeletons turn out to be younger than expected, not older. Independently of Zlatý Kůň’s age we agreed that it would be valuable to study the genome of this individual and learn more from such under-sampled region during the last Ice Age. We thus made sure the skull was scanned to preserve the 3D morphology and planned the best sampling strategy with my colleague Alexander Stössel who runs the CT-scanner at MPI-SHH. However, Yaro and Petr did not want to leave me sampling the skull alone. We therefore decided to all put on space suits and enter the clean room. While at first their company made me a bit nervous, I could not be more grateful when I realized that I was barely able to move my hand due to my bike accident. Yaro then came up with the sampling plan: he would hold the skull while I drilled into it and Petr would record photographically the whole procedure. And so we did, I wrapped the skull in aluminum foil to protect it from vibrations and, while almost sitting on Yaro’s lap (!), I drilled 30 mg of clean bone powder from the innermost part of the skull’s petrous bone, as the name suggests, the hardest bone of the human skeleton. The sampling was successful and minimally invasive, so we could all start breathing again. When we met that evening for a beer in the pub downtown we made a toast for the exciting results we would be getting from Zlatý Kůň…

A few months after the sampling day, I received sequencing data that specifically targeted the mitochondrial DNA, a small portion of the genetic information present in each cell. Without too much thinking I applied the standard pipeline and here came the first surprise. When placed on a phylogenetic tree, Zlatý Kůň mitochondrial DNA looked extremely old displaying a very short branch length compared to other mitochondrial DNA sequences. I ran immediately to Johannes Krause’s office (MPI-SHH, now Director at the Max Planck Institute for Evolutionary Anthropology [EVA] in Leipzig, Germany) with the printed tree in my hand and without saying a word we both agreed we were in front of an individual that is much older than 15,000 years! After reporting to Yaro and Petr this unexpected result we sent a portion of the zygomatic bone (a bone from the face) to the dating lab in Mannheim for an additional date. This provided an age of 27,000 years, around 12,000 years older than the first radiocarbon date. This huge discrepancy clearly indicated that the skull was heavily contaminated and we therefore decided to date it for a third time. Tom Higham (Oxford Radiocarbon Accelerator Unit, UK) accepted the challenge and, together with his former postdoc Thibaut Deviese, they applied the most up-to-date radiocarbon dating technique hoping to obtain a more accurate age of Zlatý Kůň. They reached an age of 34,000 years… again 7,000 years older than the previous one. In the meantime, Marco Mattonai and Erika Ribechini from the University of Pisa (Italy) detected evidence of synthetic contaminants in the extracted collagen, which Tom and Deviese hoped to remove with a pre-washing step before an additional dating attempt. Unfortunately, the contamination was not efficiently removed and the skull “became” younger again, only 19,000 years old. None of the four radiocarbon dates were even minimally overlapping, could any of these be the real age of Zlatý Kůň? This is when Maria Spyrou (MPI-SHH/University of Tübingen, Germany) joined the project. She performed a metagenomic screening of all sequenced non-human DNA fragments. Unexpectedly, she found lots of bovid DNA and we were even able to reconstruct the entire mitochondrial DNA sequence of a cow! From this, we deduced that likely soon after the excavation, the skull was preserved with multiple products including animal glue. The glue seems to have penetrated so deep into to bone that no technique was able to remove this collagen contamination, resulting in artificially younger dates than the true fossil’s age. We had thus finally solved the mystery of the non-overlapping dates.

We then shifted our attention to the nuclear DNA. We sequenced over 600,000 polymorphic sites scattered across the genome and started to compare this data to previously sequenced hunter-gatherers. Here, we came across another surprise: Zlatý Kůň was less similar to later Eurasian hunter-gatherers than the Ust’Ishim femur from Siberia, the currently oldest sequenced modern human genome directly dated to 45,000 years. Further analyses carried out by He Yu at MPI-SHH confirmed that the population the skull derived from split before Asian and European populations separated from each other. This branching pattern supported the results obtained from the mitochondrial DNA analyses but, in order to understand Zlatý Kůň’s real age, we needed a different approach. Finally, it was Kay Prüfer (MPI-SHH/EVA) who found the answer by studying the whole genome of Zlatý Kůň. He decided to look specifically into the Neanderthal DNA present in this individual. The amount of Neanderthal ancestry was not very high, around 3% and thus similar to what was observed in most other Ice Age hunter-gatherers. However, the game changer came when Kay analyzed the length of the DNA blocks inherited from Neanderthals. DNA segments tend to break down through time because of recombination, which takes place in each generation at a more or less constant rate. Amazingly, Zlatý Kůň had longer Neanderthal blocks than Ust’Ishim suggesting that she lived closer in time to the admixture event with Neanderthals. Using different computational methods Kay was able to demonstrate that Zlatý Kůň was as old as, if not even older than, the 45,000-year-old Ust’Ishim individual.

OK great news, but what’s the take home message here? Zlatý Kůň derives from an early offshoot of modern humans who expanded out of Africa and reached Europe much earlier than previously thought. However, this woman, similarly to other modern human genomes with an age of ~40,000 years or older, did not contribute genetically to present-day Europeans. Interestingly, ~40,000 year ago is also the time when Neanderthals disappeared from the archeological record. Linking the dots together we propose that something major happened around this time, which influenced the demise of human populations across Europe. While there are certainly multiple factors involved, including possible cultural aspects, we suggest that a continental scale environmental phenomenon might have contributed in decimating the human populations living in Europe at that time. A potential candidate is the Campanian Ignimbrite eruption, the super explosion of a volcano located in southern Italy that took place around 39,000 years ago and covered large parts of Eastern Europe under ashes. Did this event affect both Neanderthals and early modern humans? More genomes from this period will help address what happened during the times when modern humans were not the only hominin group wandering around Europe. Certainly also back then it wasn't an easy ride!

You can find here the link to our open access paper entitled "A genome sequence from a modern human skull over 45,000 years old from Zlatý kůň in Czechia" published in Nature Ecology and Evolution on 7th April 2021.

Are you curious to know more about our findings? Check out the video below with Kay, Johannes and me presenting the study (produced by Hans Sell @MPI-SHH).

Many thanks to Maria Spyrou, Johannes Krause and Kay Prüfer for their comments to this blogpost and to all co-authors for the great team work. 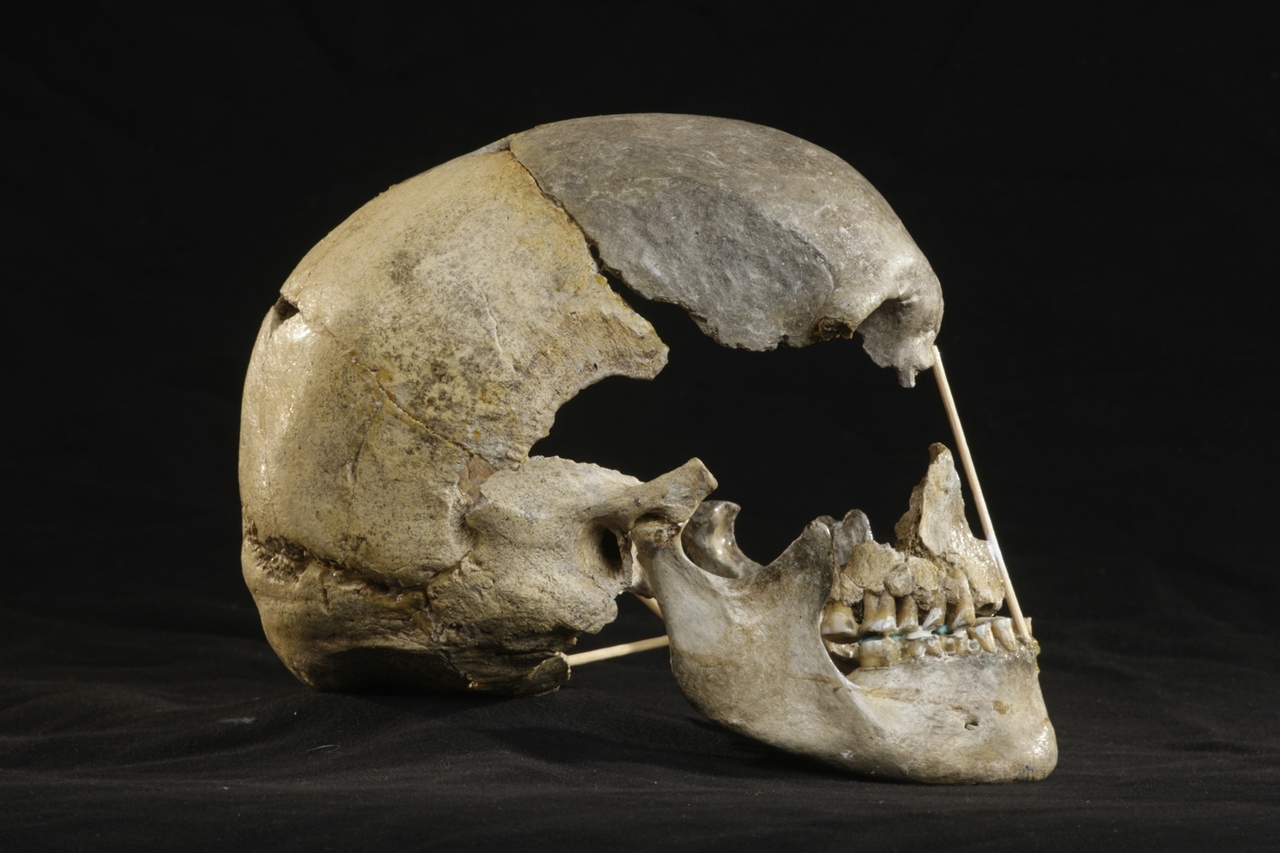 A bumpy ride to the re-discovery of Zlatý Kůň

Largely forgotten by the scientific community for almost 20 years, Zlatý Kůň, the skull of a woman found in the 1950s in Czechia has provided the oldest modern human genome yet reconstructed, suggesting that some of our ancestors expanded into Europe more than 45,000 years ago but later disappeared.